From the circus to the wilderness. You don’t need to cross Alaska by dogsled or search for the most spectacular adventure. Stefan Bellika has done quite a few extreme projects in truly wild nature, but the most important isn’t the major hardships. – The most important is that I get to be outdoors a lot, says Stefan. 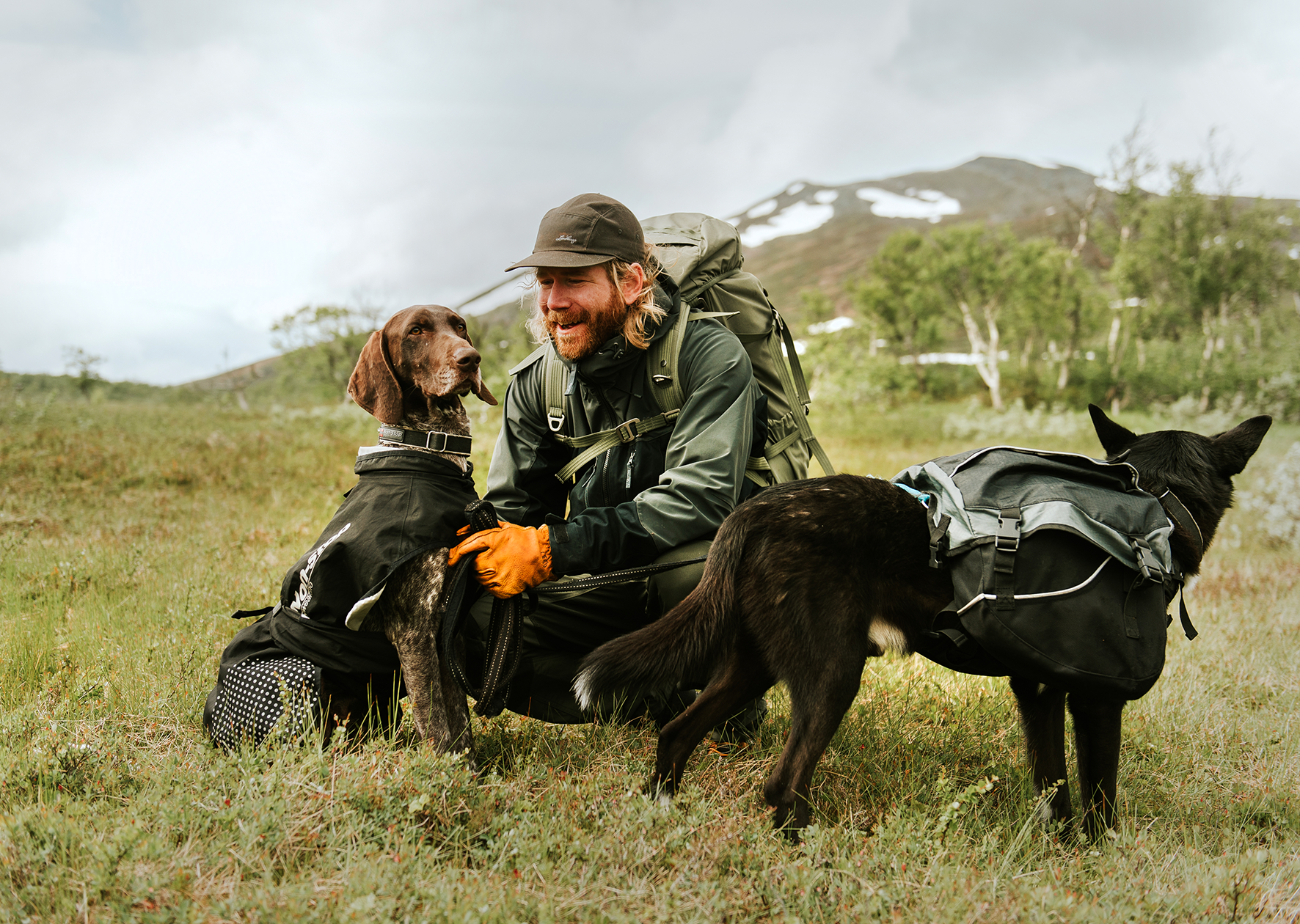 It’s rather difficult to quickly summarize Stefan Bellika’s journey from performing as an acrobat in a circus to a slightly more natural life at his hut on the border to Stora Sjöfallet National Park, north of the Arctic Circle in Norrbotten. A place located three hours by skis and draft dog from Gällivare, where he works as a dog physiotherapist. But if we take the short version, there are several milestones from his upbringing in Skellefteå, which include among others hockey and fishing. At upper secondary school, Stefan went to Stockholm and became a circus artist. Hanging out with the skateboard crowd, and skating quite a bit, then led him later on to photography, which until today has been his main source of income, even if he never really aimed for a career as a photographer. But the story has several facets.

– The outdoors wasn’t something I thought about specifically where I grew up. It was such a natural element and was just there as soon as you had some free time. You have a grandfather who fishes and parents who take you outdoors. When I look back, I don’t even think about it as outdoor life, but it certainly shaped me very much. The 12-year old me had no ambition to live in a hut next to a national park like I do now.

The big turning point, that which really piqued his interest for the outdoors, came when Stefan got his first dog. He bought a rather demanding breed and he wanted, with his own methods, to see how well he could train it.

– I got a Border Collie. One that could tend to the sheep and demands a lot of work. Those who know me thought that I wasn’t calm enough to handle such a demanding dog, so of course I chose such a dog. Then I was forced to prove to everyone that I did it. I wanted to essentially be historical in dog ownership. Herding training is one thing and I didn’t want to do like everyone else, I wanted to do better. I thought that if my dog had better conditioning than all the other dogs, then I’m in good shape. So, I began going skiing with the dog, but it was new to me. I phoned a dogsled kennel to ask how it was done. And then I began helping at the kennel.

– I remember the first time I walked into the dogs with the man who runs the kennel. He lets out all the dogs, and we just stand there and don’t hear a sound. More than 60 dogs play with each other, and he stands there like a conductor and steers the whole thing. I then felt that “I want to be that man”.

Stefan became more and more involved in the business and he did so well that he was entrusted with his own dogsled. Soon, it became four dogs with a small team. But if you have a small team, you’ll want a large team. And if you have an eight-dog team, you want a few more dogs if you get visitors and want to form one more team. Many of the dogs were transfer dogs. Stefan followed his own ideas when it came to training, and it became apparent that these dogs did well when he competed with them. His theories about dog training were successful. And when he fell for draft dogs, had his own kennel and had developed his own training programs for them, moving west was not far away. The same drive as with the first Border Collie.

– I thought that I have to look at someone who is really good. Alaska was the goal, since dogsledding is a national sport there. It would be dumb to not go to the source right away. A quick Internet search and a call and chat with a kennel. I told them that I had a plan for competition dogs. It took about two weeks before I booked my ticket, so you can say that it was a really short take-off.

In Alaska, Stefan trained successful dogs for the world’s most notorious dogsledding competition, Iditarod. As an ending to his Alaska visit, he had gathered his own team, and went out with on a three-month long odyssey through the wilderness. One of his goals was to meet people who had essentially brought an axe and a saw and settled down in the bush. A John Doe or Joe Blow, so to say. Or simply Steve Allman, whose cottage Stefan passed 300 km for the nearest community in roadless country.

– There was a man who had lived out there for 50 years. He had to rebuild his cottage several times because bears continually came in. Incredibly, he knew a lot about Swedish policy. Each year, he received necessities together with the year’s news magazines dropped off from an airplane. It was slightly mind-blowing to sit out there and, with broken English, talk about the Swedish safety net and how you could apply it in the USA.

Besides the few and rather strange encounters with people, the tour offered insight into the interplay between dogs and humans. On several occasions, it was the dogs’ route choice, cunning, instinct and outdoor know-how that made the journey possible and safe. Once, the dogs refused to cross a frozen river. Stefan tried for hours to motivate them to cross at one spot. In the end, he gave up and the dogs decided themselves where they would go over. They crossed the river several meters downstream and then went obediently in the exact same direction that Stefan had pointed towards.

– The ice was probably too thin to go over. Numerous times, it showed that the dogs made smarter decisions than me. And I’m very humble to what the dogs know and feel about the outdoors.

Not surprisingly, you can see that a three-month tour through Alaska, during the coldest months in 30 years, includes several near-death experiences and anecdotes that could easily fill a book. Even relatively uncommon knowledge is acquired. For example, how you poo outside when it’s minus 40C for three weeks. And that you can bake bread with just beer and flour.

Undeniably, it sounds rather rough and difficult to cross Alaska by dogsled. You can wonder if this is something the man on the street would get through.

– I wasn’t walking around being a tough guy, I was often pretty scared. To complete such a tour is mostly about being comfortable with yourself. And that the dogs are my best friends means that I don’t feel particularly alone when I’m out there. I don’t know how it would have gone without the dogs.

When his visa expired, Stefan returned to Scandinavia. This time he settled down first in Tromsö and then in Alta, both in northern Norway. Of course, with a focus on dogs, photography and outdoors. In the beginning, he set his sights on spectacular performance-oriented projects. From 2005-2007, it was relatively easy to get sponsoring from outdoor companies. But with time, Stefan discovered that it was the experience itself that was important, not standing front and center, and doing this and that, that it was so-so long, at any given time.

– The joy of the tours disappears if I have to chase to succeed or risk failing all the time. But sure, I got hooked for a while on the “what can I do that sticks out?”

Even if many view Stefan as a wild man and adventurer for wide open spaces, who has abandoned the “normal” life,  this is not the way he perceives his life. Sure, he likes being outdoors. He drafts dogs, goes skiing, fishes and hunts. He has actually never felt that he’s left something and replaced it with extreme experiences. He’s just as comfortable pitching a photo job for an advertising agency in some oyster bar in Stockholm as he is in a wicked snowstorm 400 km north of the Arctic Circle.

At the time of writing, Stefan is just on his way to do his exam as a dog physiotherapist. But he also works as a photographer and wilderness guide. The physiotherapist job is thought to be a kind of base to make a living.

– Of course, everyone is welcome, until I have the resources to be more selective. Then the Chihuahuas will join in, says Stefan with a laugh.

Lives: In a hut without an address 15 minutes from the road to Stora Sjöfallet National Park, 40 km south of Gällivare (three hours with dogs and skis).

Is it the road that’s worth the effort?
“No, no. I don’t enjoy carrying around heaps of stuff very far. The enjoyment is getting there, setting up the tent and gazing out over a marsh”.

Four important: Four seasons, trout on a dry fly, a dog who calmly shows where a grouse is, and Ettans snuff.

How much of a hunter are you? “I hunt a lot but I’m no hunter. For me, it interesting to work with the dog. It’s really incredible when a dog does what it does”.